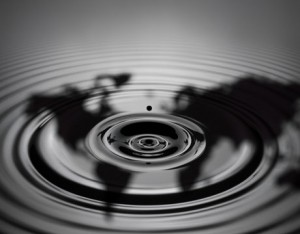 The last century can rightly be called the Age of (Inexpensive or ‘Cheap’) Oil as world oil consumption grew from about 20 million tons per year in 1900 to just under 400 million tons per year in 2005. Since 2005, however, world oil consumption has been nearly constant despite high demand and record high oil prices, which indicates that we simply cannot produce oil any faster. And since oil is not renewable, eventually the production (and therefore the consumption) of oil must decline.

Declining oil production will be an extremely painful reality for the U.S. because not only does the rate of energy use strongly affects national wealth, health and education levels, but the American economy is built on two largely unspoken assumptions about oil: First, we assumed we could have all the oil we wanted, and second, we assumed that oil prices would be relatively low ($20 per barrel) and stable. Neither one of those assumptions is true anymore, and as a result, U.S. society has entered into a painful transition, highlighted by much of the turmoil that we see around us – such as the rise and fall of places like Detroit, the 2008 financial crisis, and the reduced tax base for local and city governments and subsequent reduction in services.

As the oil age winds down even bigger problems will arise: High unemployment will follow a shift away from industrial and occupational hyper-specialization, high and volatile oil prices will wreak havoc on the food system, and national and international trade – particularly in commodities – will be in turmoil as prices and price volatility increase. Since trade has always been a catalyst for wealth creation, the buffeting of trade will likely reduce American and global wealth creation.

Perhaps the most far-reaching and transformative effect of the end of cheap oil, and the end of growth in oil consumption rates, will be a significant and long-lasting brake on economic growth. Increased rates of oil consumption over the last century led to greater economic activity, higher gross domestic product (GDP) levels and bigger tax receipts. Over the past decade, coinciding with the end of cheap oil, growth in real GDP has been very slow in the US and the developed world and thus tax receipts are stagnant or declining. What will happen to our social programs and entitlements that require continuing economic growth? I believe it will be a very painful period for the U.S. and other nations as we revisit and revise our social programs to account for lower economic growth.

If we are to make wise decisions about our future, we must understand and accommodate ourselves to this harsh fact: the age of cheap oil is over, and it will not return.

Do you agree with this analysis of the oil landscape? Please comment.

Read the original version of Dr. Bruce Dale’s editorial, first published in the journal Biofuels, Bioproducts & Biorefining, here: “The times they are a-changin’: the end of cheap oil and how it is changing our world.”

I very much agree with this analysis. I have written about this subject to a significant extent, including an article published in the journal Energy called, Oil Supply Limits and… Read more »

I do think Dr Dale’s article neglects the impact of drilling for oil in shale…in hard to get at tight oil. While I do not believe that shale oil will… Read more »

As a point of clarification, in Dr. Dale’s original editorial, he wrote this about ‘new’ oil: “The ‘new’ oil (from deep-water drilling, enhanced oil recovery, tar sands, etc.) is much… Read more »

thanks for clarification…but really even with limitations to “new oil,” restricted gasoline markets plus the other factors mentioned in my comments above, assuming they occur, will grant emphasis to drill… Read more »

I thank everyone for their comments. For those who may be interested, the full text of my editorial “The Times They Are A’ Changin…” from which Michael Spiak kindly extracted… Read more »

Pwc just issued a starkly contray report http://pwc.to/WKSWqB which is worth adding to this discussion (even if it is built off of a flawed assumption that conventional crude production will grow about… Read more »

Personal experience has made me skeptical of ‘peak oil’ prophecies like Dale’s. I don’t know who Dale thinks “we” is, but his initial statement — “First, we assumed we could… Read more »

I thank Dr. Perelman for his comment on my post “The End of Cheap Oil…”.  I will try to be clear, and hopefully polite, in my response to his observations.… Read more »

I have a few comments in response to Dale’s rebuttal to my earlier critique of his essay.   1] First, Herschel Specter posted a similar argument recently linking petroleum… Read more »

There are still a number of points in my response to Dr. Perelman’s initial post on my article to consider – beyond the “correlation is not causation” argument – such… Read more »

While I think this debate has largely run its course, I have a few points to offer regarding Dale’s latest response…. 1. >>I still reject Dr. Perelman’s claim that “Most… Read more »

[…] high fuel costs experienced in the U.S. over the past ten years have encouraged many attempts to identify the underlying causes of these trends. Diminishing oil resources, slowing rates… Read more »

[…] we have reached peak oil — where the world’s demand exceeds the supply.  Indeed, the end of cheap oil and gasoline is already here.   In the last 22 years,… Read more »

The Cost Of Cheap Oil | DLP-Productions